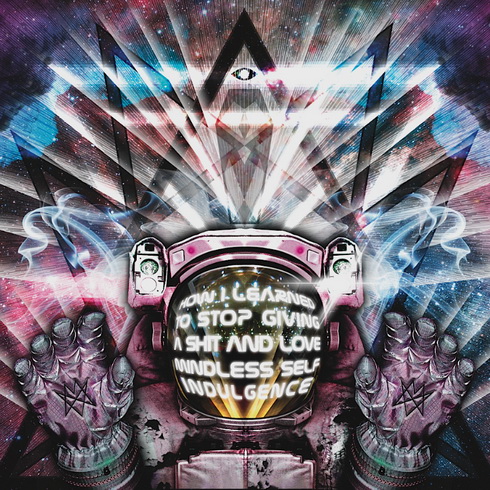 When I was younger, I’d say eleven or twelve or so, my older brother and sister introduced me to Mindless Self Indulgence. And it was literally unlike anything that I had ever heard before. It was also unlike anything my parents had ever heard apparently, because the look on my father’s face when he heard “Faggot” coming from my bedroom stereo was priceless. Again, I was twelve.

For around a decade and a half, Mindless Self Indulgence (and I’m just going to call them MSI from now on because it is far easier) have been pioneers within their genre, one that they have built on their own – a combination of electric-punk-hip-hop that is distinctly theirs.

The opening track, “Witness,” solidifies this idea – that the band was the first to craft this style and that they’re the best around at it, leading the album off with an anthem that screams “I am perfect. / I am the best. / Fuck everybody else.” And throughout the rest of How I Learned…, they deliver a half-hour of trademark material and attitude.

Songs on the album are as random, unexpected, fun, and original as you’d expect them to be coming from MSI. “Hey Tomorrow…” begins as a hyperspeed-spoken sprint until dropping into a soaring chorus, while “Ass Backwards” is a faux-fairytale-storybook narrated romp that demands dance moves. The cover of Supertramp’s “The Logical Song” is certainly categorized in the “we didn’t really see this coming” vein. But along with the surprise of it comes a great, original retelling of an old classic.

“Ala Mode” is one of my new favorite songs by the band. Hell, it may be one of my favorites throughout any band’s career ever, strictly due to the presence of the lyric “Everyone hates you? / Ice cream will fix it!” But even without that thrown in there, the song is still incredibly upbeat and catchy, sure to appease any listener’s musical sweet tooth.

The 8-bit, scream-laced “Casio” is another highlight on the record, sure to draw interest from any listener, whether they’ve been fans for fifteen years or fifteen minutes. “Stalkers (Slit My Wrists)” is one that could soon be a fan-favorite, while tracks like “Anonymous,” “It Gets Worse,” and “Kill You All in a Hip Hop Rage” are some that, on first listen, may sound like ones to be passed on. But in classic MSI-fashion, regardless of the ridiculous lyrics, they’re still a blast to listen to.

Ever since their earliest days, Mindless Self Indulgence have exuded a can-do, will-do, fuck-you attitude, and How I Learned… is no divergence from this ideal. There’s a reason the band has been able to stick around for this long, and when if continue to release music that will please their fans, much like this album is sure to do, it’ll be no surprise to still be hearing from them a few years down the road.